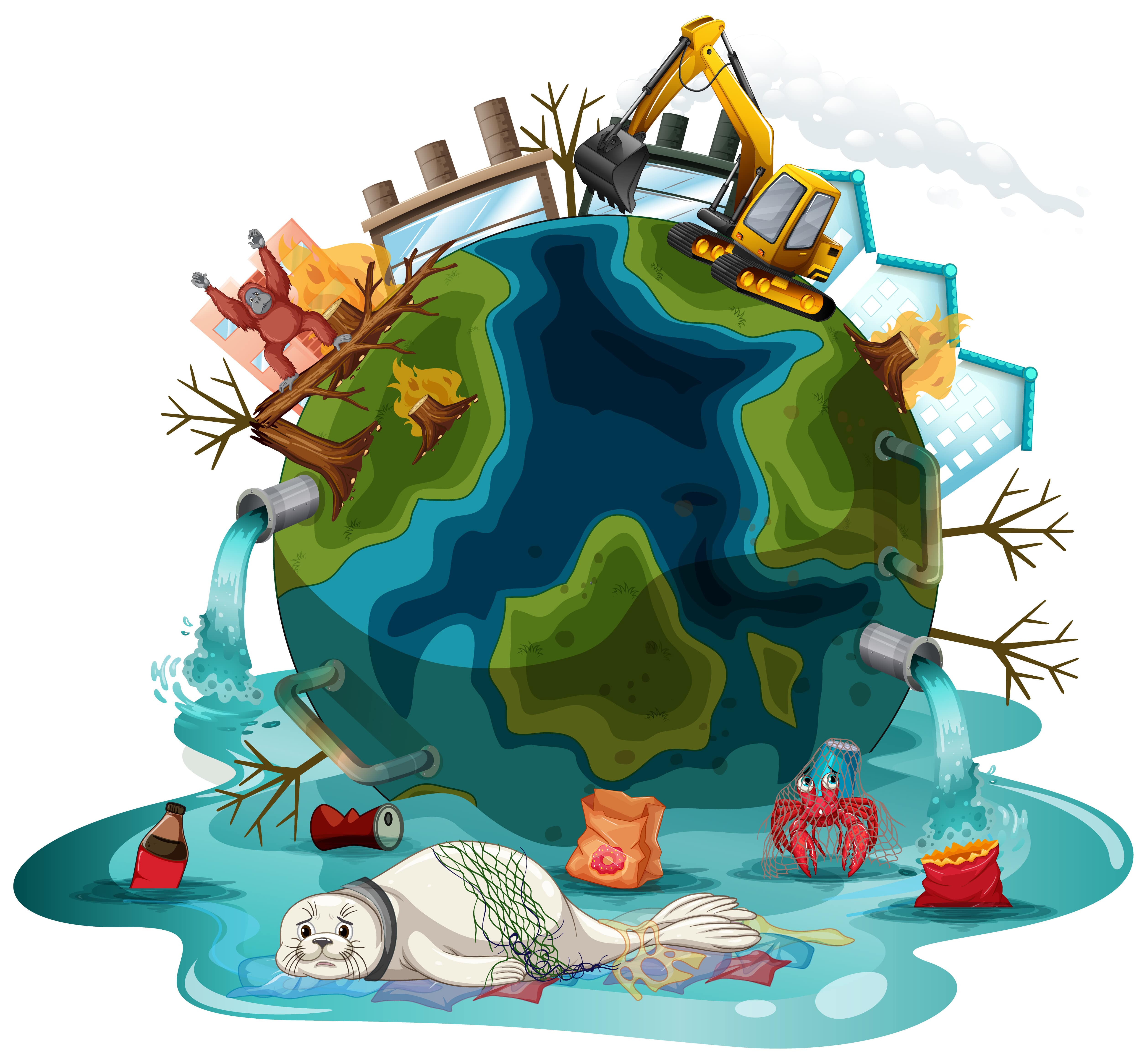 How To Fight Climate Change Using AI and Computer Vision

How To Fight Climate Change Using AI and Computer Vision

Have you ever made a sentence with the words "climate change’’ and "artificial intelligence’’? Now, it is time to talk about the most serious problem on Earth -climate change- and the possible solution: artificial intelligence.
‍
The changing climate is impacting everyone in every nation on every continent, harming the national economy and individual lives. The weather
is growing more intense; shifting weather patterns are occurring more often; and sea levels are rising.
‍To maintain a sustainable environment, greenhouse-gas emissions must be cut in half by 2030 and reduced to zero by 2050. Governments and corporations must take swift and far-reaching action. However, the shift to a low-carbon future requires the involvement of technology.
As artificial intelligence (AI) is getting more advanced and used in more businesses, it is possible that AI, notably computer vision, is used to combat climate change. ‍

There are several applications for artificial intelligence in the battle against climate change. Some AI algorithms are designed to improve residential and company energy efficiency, while others may detect and avoid catastrophic failures of energy facilities in order to cut carbon emissions.
Developing computer vision programs enables other AI systems to view in more complex and realistic ways, allowing them to combat climate change on a whole new level. For businesses and people wanting to decrease carbon emissions, computer vision can aid in the battle against climate change in ways they never imagined possible.
This blog will discuss how AI and computer vision can help with the climate crisis and provide some AI and computer vision applications against global warming.‍

Let's start with how AI can help with climate change mitigation efforts.

Can AI Help the Climate Crisis?

Simply put, yes, AI can help the crisis with many AI and computer vision applications. Numerous artificial intelligence (AI) applications can be used to combat global warming. Some have already been implemented, others are in the testing phase, and others have not yet reached the first phases of development.

However, AI is already being put to good use in environmental sciences, and its further employment in the battle against climate change is likely.

Keeping track of changes in weather patterns is essential to fighting the climate crisis. If possible, AI can help monitor these changes and warn people to give them time to fix them- if possible.

Artificial intelligence has seen widespread acceptance in the monitoring of current systems to raise a warning flag in the event that issues are identified and propose new approaches to improve operational efficiency.

AI can track both personal and business carbon emissions and suggest ways to reduce some of these emissions. This is a basic example.

It goes further than that because it can help sustainable farmers and livestock thrive by keeping track of current and accurate weather patterns. Even the food we eat can be used to fight climate change when crops and livestock can take advantage of changes in the weather or be protected from disasters caused by them.

AI can control emissions and garbage.

They can be controlled when carbon emissions can be tracked and anticipated with more precision.

Humans generate natural and artificial waste at an alarming rate, yet this garbage is often not disposed of in a practical or environmentally friendly manner. Sensors and real-time updates on city trash have been utilized in conjunction with AI to improve garbage management, allowing for more special waste collection and the assessment of whether or not trash should be destroyed or removed.

As a result, not only will trash be easier to manage, but the emissions from garbage trucks will be reduced to an acceptable level.

The field of computer vision is a subset of AI that uses computational methods to simulate the human eye. Similar to how people interpret visual information, computer vision programs can "see" and "respond" to visual communication, making judgments depending on what they "see." This is accomplished by extracting valuable information from digital images, movies, or other optical inputs.

Computer vision allows AI algorithms to "see" more and understand more data than they ever could.

A computer's ability to observe and recognize things is only as good as the artificial intelligence used to teach it. Our eyes have evolved over millennia to process visual data and provide meaningful insights. For the same reason, computer vision is susceptible to prejudice and inaccuracies in interpreting the visual information it is equipped with.

As a result, a substantial amount of information is needed for use in computer vision AI. It learns to identify photos by analyzing data repeatedly until it can identify subtle differences. So that it may learn to distinguish between different kinds of fire and their various phases, an AI system needs to be exposed to a vast number of pictures linked to fire.

An AI system can learn to recognize objects in its surroundings and make decisions based on the data it receives by repeating this process. This paves the way for various tasks that computer vision AI may play in the battle against climate change.

How Can Computer Vision Manage the Climate Crisis?

The subfield of artificial intelligence known as computer vision can be especially helpful since it has the potential to see and understand complex visual data that would take humans months or even years to detect on their own.

For a better understanding, it is essential to emphasize the difference between artificial intelligence and computer vision. Artificial intelligence (AI) refers to using computational systems to solve problems that traditionally require human intellect. Simplified, this refers to the process of teaching computers to mimic human cognition and behavior. Examples of tasks and functions include voice recognition, language translation, decision-making, and visual perception.

That's where AI-powered image recognition comes in. The term "computer vision" is used to describe how computers can analyze and comprehend visual input, mimicking the human optical system's capabilities but also automating them.

(Check out Cameralyze’s blog about computer vision for more information.)

It is possible to make significant steps in the fight against climate change by using computer vision, which can distinguish specific environmental characteristics that are directly connected to climate change, such as temperature differentials, changes in weather patterns, and variations in precipitation. Such devices include a wide range of cameras and sensors developed specifically for such applications.

Computer vision systems may identify small changes that may be a consequence of climate change by watching patterns that could otherwise defy the naked eye via continual and consistent observation beyond human capabilities. Researchers and scientists will be able to better control issues that might impact our climate and environment using a complete computer vision system.

Using AI to identify and even recommend solutions to cut carbon emissions is one of the most significant advantages of using AI in the fight against the climate crisis.

Monitoring and regulating specific aspects such as traffic flow is one inventive technique to utilize computer vision to fight the effects of global warming.

Congestion at crossings can be avoided, and carbon emissions from automobiles can be decreased with the use of computer vision algorithms that detect when traffic is building and adjust traffic signals accordingly. A city's carbon footprint can be significantly reduced if a system like this is implemented citywide, or at least in highly populated regions.

Object Detection with Computer Vision solutions from Cameralyze might be helpful for this step, particularly when it comes to spotting automobiles.

Cameralyze's Object Detection solution can identify and label various items, such as cars and people, in an image, video, or live stream, as well as recognize your visual data and track moving objects in a live video feed in real-time, all while gathering multiple data sets.

The reliability of electrical systems varies widely around the globe. Many environmental conditions make some of them a more significant burden than others, making them difficult to manage. A typical example is the potential for harm to both humans and the environment in flood-prone regions.

In order to combat global warming, computer vision can be used to manage and enhance these systems. An AI program can monitor for potential dangers, detect when a particular part of the grid is in trouble, and manage the systems to shut off power to avoid catastrophic failures by distributing electricity and energy where they are needed and reducing power flow when it is not required, combined with computer vision to see weather patterns in the surrounding area.

Arid regions and places prone to wildfires can also benefit from this. Fires may cause a lot of damage and pollution, so it would be great if computer vision could be used to cut electricity to places that are about to be struck by severe weather and to monitor power surges and other spark-inducing conditions.

In addition to helping combat climate change by lowering local carbon emissions, this AI development can protect both the environment and the people who rely on the power grid by reducing the likelihood that individual components will malfunction and cause the grid to fail or, worse, explode.

It is now up to you to join the battle against climate change, as we have provided you with all the information you need to do your part, including the use of cutting-edge technology like computer vision and artificial intelligence.

There are many ways in which computer vision can help in the battle against climate change; the only natural limitations are those we place on ourselves in terms of our ability to think creatively and integrate computer vision deeply enough to develop existing systems.

Cameralyze's Object Detection Solution utilizes computer vision to identify patterns in traffic and provide smart route suggestions, increasing each vehicle's carbon footprint. This, if applied on a larger scale, has the potential to have a significant and beneficial impact on slowing the progression of climate change.

To learn more about AI-based solutions, visit our website!