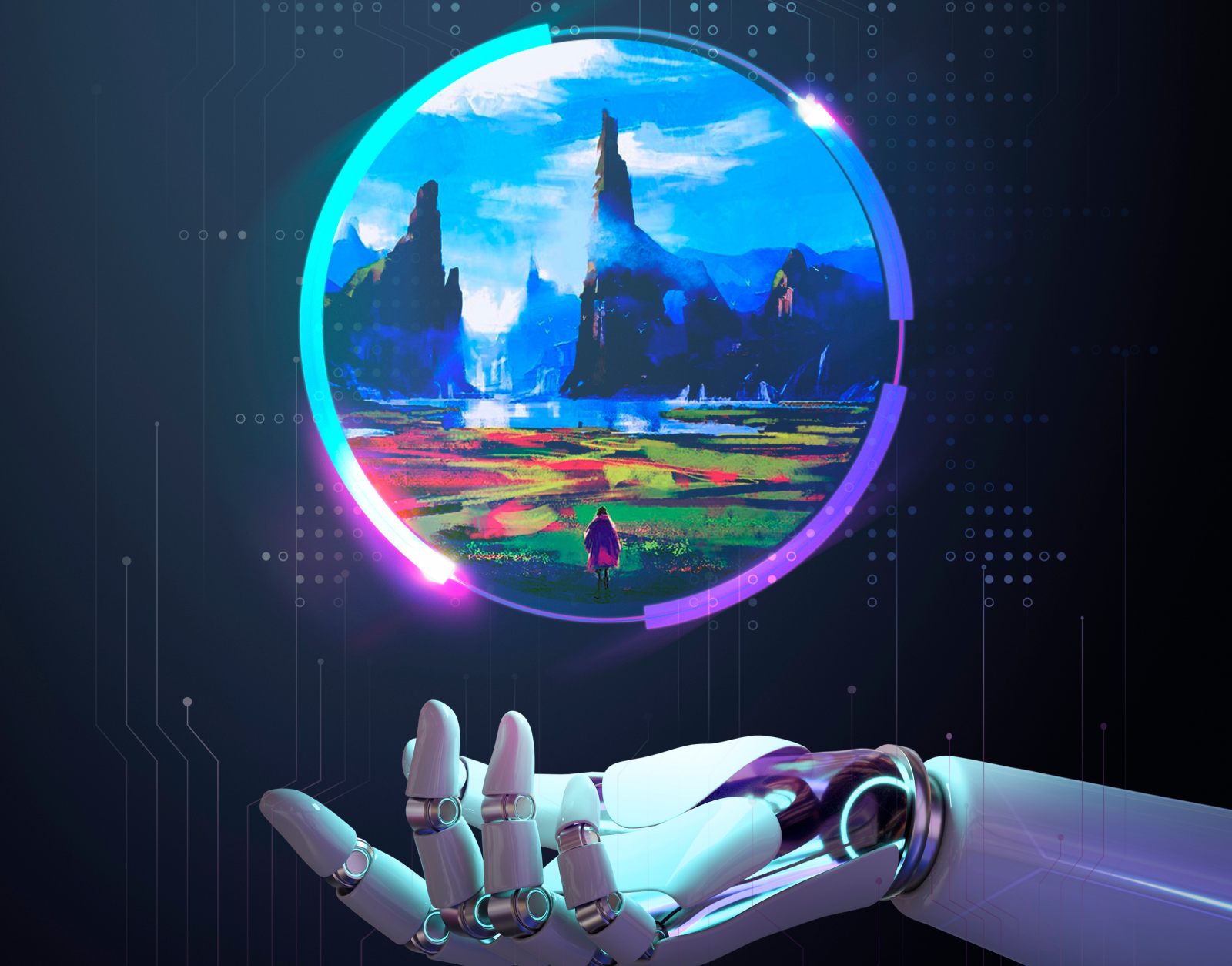 In this blog article, we will look at how incorporating AI might change not just the trajectory of digital art and art history but also our outlook on the future of the arts as a whole.

Art has always been integral to human society, dating back to the first cave drawings. It allows us to share our experiences and ideas with the world.

Significant advancements in artificial intelligence (AI) have been explored, and its potential applications in several fields, including art. But it's generally agreed that humans are the only creatures capable of both art enjoyment and art understanding.

In this blog article, we will look at how incorporating AI might change the trajectory of digital art and art history and our outlook on the future of the arts as a whole.

In this article, we will discuss the following topics:

What is AI Art?

AI can create original works through machine learning and a variety of self-learning algorithms that extract information from data. The creation of AI art requires the input of both the human artist and the AI system; however, the degree of autonomy can vary widely, and the final product is highly dependent on the accuracy of the training data.

Artists use AI as a tool, collaborating with algorithms to establish rules that enable computers to examine hundreds of images to understand a specific creative process, such as a particular style or aesthetic. Algorithms create original creations by generating unconventional geometrical, figurative, and patterned motifs. Machines are not the only thing AI artists work with; they also work with programmers, statisticians, computer scientists, and neuroscientists to create cutting-edge technology that challenges the limits of human ingenuity.

If you wonder how machines can learn, you can read our latest article.

Overview Of The Evolution Of Computer-Generated Art

AI-created artwork has been around since computer graphics, and the digital age began. Computer graphics were used to generate basic shapes and patterns in the 1950s and 1960s. These first instances of AI-generated art were made using simple algorithms to produce designs for on-screen display.

In 1967, the German physicist Frieder Nake compiled a portfolio of twelve photographs under the title "Matrix Multiplications." Frieder Nake generated a square matrix containing numbers, multiplied it by itself in sequence, and then used the resultant matrices to transform intervals of numbers into visuals.

The numbers were represented graphically, each with its own shape and hue. They were then arranged in a raster with coordinates determined by the matrix's values. During this time period, Nake often employed random number generation, and his multiplication was probably partially mechanized.

The use of artificially created artwork in CAD applications first emerged in the 1970s and 1980s. With the help of computer-aided design (CAD) software, artists and architects can digitally sculpt three-dimensional forms. Thanks to this, more intricate and lifelike visuals could be made. One such set of algorithms was AARON, created by artist Harold Cohen in 1973, which enabled a computer to mimic the shakiness and inconsistency of freehand sketching.

While Cohen ordered AARON to paint certain items, he discovered that some of his instructions resulted in shapes he had never seen before. He found that the orders he programmed gave the computer the ability to make choices that resembled those of an artist. AARON's work evolved from abstract paintings in the 1970s and 1980s to drawings of rocks, plants, and people in the 1990s.

The usage of AI-generated art expanded beyond just visual effects in the 1990s. Algorithms developed by artificial intelligence quickly became the medium of choice for composers and poets looking to experiment with new forms of expression. Robotics also started using AI-created artwork, and paintings and sculptures were created by robots that were programmed to do so.

Various industries now use AI-generated artwork, such as advertising, architecture, fashion, and cinema. Images and animations that seem and move like the actual thing are made using AI algorithms. New musical and poetic styles are being developed with the help of AI-generated art.

The Pioneers Of AI-Generated Art

Google's DeepDream was the first well-known attempt to use AI to make art. DeepDream is an algorithm originally used to find faces in images as a face classifier.

Alexander Mordvintsev figured out that it can also be run backward, giving the input face-like features. This made images that were like dreams and very psychedelic.

How Is Artificial Intelligence Used to Generate Art, including Algorithms and Neural Networks?

AI is used to generate art in a variety of ways. AI algorithms can produce photos or videos depending on a set of parameters or combine and edit existing images to create new ones. Neural networks could be used to make pictures or films that resemble a particular artist's style or are related to a specific art form.

Generative Adversarial Networks are the go-to technology for creating new artwork like current artwork. When Deep Neural Networks are used to transfer the style of one art piece to another, the process is known as neural style transfer (NST).

The basic concept behind NST is that a feature space initially created to capture texture information is utilized to generate a representation of the style of an input picture.

This feature space is constructed on top of the filter responses in each network layer. It comprises the correlations between the various filter responses throughout the feature maps' spatial area. The authors created a stable, multi-scale representation of the input picture by adding the feature correlations of many layers, which captures the texture information but not the global layout.

For example, Companies like OpenAI, with their Dall-E program, one of the most powerful platforms for making AI art, helped advance the technique further. DALL'E 2 is a game-changing technology that employs artificial intelligence to generate original works of art, and DALLE 2 can produce images from texts.

Artificially intelligent art generators ultimately use deep learning to learn from existing data on the appearance of various objects, textures, and ideas at the end of the day.

The Pros And Cons Of AI-Generated Art

Let's look at the benefits and drawbacks of using AI in the artistic process and clarify a few points that have been raised.

Among the many advantages of AI-created artwork are:

Movies can use AI-generated images and videos for supernatural scenarios that otherwise would be impossible to film.

While some artworks can AI "thinks" beyond the box to develop novel examples, some may be difficult or impossible for humans to conceive independently. Such works of art can even serve as a source of ingenuity for much larger undertakings.

Like AI models and the data used to train them, the artwork produced by AI is constantly evolving. This provides a constant stream of fresh ideas rather than one that reaches a plateau.

Challenges that arise from using AI to create art include:

Even though AI can produce convincing graphics, which might be mistaken for those made by a person, it cannot convey the feelings and motivations that go into creating art on its own. This might be a significant roadblock for many individuals when appreciating AI-created artwork.

Without outside assistance, AI cannot create original works of art. In order to train it, we feed it information that is already in our possession. Thus, it can be said that all the artwork it generates is ultimately a result, but it has derived from so many sources that it technically becomes new art. So, if a model is only ever trained once and then never updated with new data, it risks producing boring, repetitive art.

However, modern methods such as Zero-Shot Learning or Self-Supervised Learning can update previously trained models with new data without necessitating full retraining.

As soon as the model is trained, it will automatically generate output depending on the weights it was given during training, leaving us with no say in the creative process. During this procedure, we are unable to make any adjustments by hand.

There's a chance we won't be able to influence how the final work is used, copied, or disseminated. Furthermore, lifelike visuals or films can be produced using AI-generated art to trick people into thinking something incorrect. Whether or whether its easy availability is a good thing is a matter of debate.

In the end, art comes from a person's imagination, skill, experience, and feelings. It is usually meant to show something and be enjoyed by the public.

But there are things that people made that don't fit any of these categories but are still art because people made them. They put a lot of time and effort into making that painting, sculpture, or piece of music.

Artificial intelligence also spends a lot of time sorting through a lot of data, connecting a person's question to a set of data, and trying to show it in the best way possible. The difference is that the AI is driven by instructions, not by a need to show how it feels.

In the last few decades, AI has become much better at making art, from making hyper-realistic pictures to writing movies. People often use generative models for these tasks, which, when given enough training data, can create new data.

Although the precise trajectory of AI-generated art remains unclear, current AI technology can produce pictures, movies, and texts convincing enough to trick humans. So, the possibilities of AI art are both exciting and scary.

As we've seen, AI shows itself in many different areas, from generating artwork to recognizing objects and humans in pictures.

If you need computer vision solutions, Cameralyze is here to help you! Many of the AI functions on this platform can be used without technical knowledge. With more than +1000 AI-based applications, Cameralyze offers an easy-to-use visual intelligence platform that saves money and time! Let's contact us to use it for free!

To learn more about artificial intelligence and its use cases in different sectors, read these blog articles: